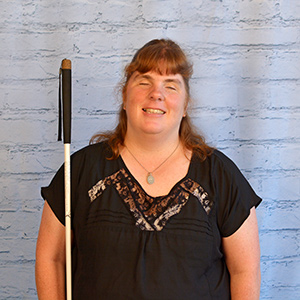 Today Amy Rut Buresh says, “My blindness is simply another of my characteristics like my auburn hair.” She didn’t always feel that way. Amy Rut was born prematurely June 4, 1974, in Fairbury, Nebraska, and has been blind since then from retinopathy of prematurity (ROP). When she was five, her family moved from their farm to Nebraska City so that she could attend the Nebraska School for the Visually Handicapped (NSVH). Her parents made the difficult decision to relocate to a new community far away from family, friends, and all they knew so that Amy could continue to live at home during her school years rather than in a dormitory. Young Amy received a solid education and had a normal family life, complete with two pesky little brothers, family campouts, picnics, dress-up, and backyard sports. Amy has said her family’s sacrifice was crucial to her peace of mind in her formative years, and she has always been grateful her parents made the choice they did.

While a student at NSVH, Amy received training in many blindness skills, the most critical of which was Braille, which helped her to excel academically. She participated in countless musicals, the track team, cheerleading, and speech competition. In her freshman year Amy began taking classes at the public school in Nebraska City. Although she was active in extra-curricular activities, including service as president of her school’s chapter of the Fellowship of Christian Athletes, Amy found it hard to make friends. She recalls that throughout her public school years she sat through many lonely lunches. With an outgoing personality Amy easily made acquaintances, but no one invited her to parties or asked her to go to the movies.

Amy took piano lessons from kindergarten through her sophomore year and voice lessons from her freshman to her senior year. She still sings at churches, banquets, and karaoke as often as she can. She taught summer enrichment courses on the basics of Braille to school children in her hometown. Through the Nebraska Human Resources Department at the University of Nebraska at Lincoln, Amy also participated in a Big-Sister-style program, in which she was paired with a blind elementary school student whom she continued to mentor well after the program’s conclusion.

Growing up, Amy had few positive blind role models and limited contact with her blind peers. During her teenage years she first participated in youth programs sponsored by the Nebraska Commission for the Blind and Visually Impaired (NCBVI), where she gained many valuable skills and met her future husband.

For several summers Amy worked as a volunteer counselor at the Summer Kids Independence Program (SKIP) Camp, a program for children ages five to twelve, sponsored by NCBVI. She wanted to share with other blind youth the things she had learned during her high school journey: which plans had worked for her, and which hadn’t. She believed then and believes more absolutely today that mentoring is important in improving one’s attitude toward blindness and a great way to learn how to handle being different in our society.

Whether at home or at school, participating in music, academics, or athletics, Amy was successfully working and competing with her sighted peers. She was even named second runner-up in the 1990 Nebraska City Miss Applejack Pageant. Yet in addition she had to face another, deeply personal aspect of life. As a senior in high school she began wrestling with life questions that neither her family and teachers nor her sighted peers could answer. Could she really be successful as an independent blind adult? Would she ever marry and have a family? What about employment? Could she get a job and do it well?

Following graduation, Amy began conquering her fears and seeking answers to these nagging questions by attending the Orientation Training Center of the Nebraska Commission for the Blind and Visually Impaired in Lincoln. There she was first introduced to the underpinning philosophy of the National Federation of the Blind and, equally important, to kind and inspirational Federationists.

Armed with newfound confidence and skills, Amy enrolled in Peru State College, graduating with a BS in psychology, sociology, and criminal justice. Throughout her time on campus she was active as a peer mentor, in student senate, and in residence hall government. She also soloed and toured with the concert choir. She helped found and held several offices in the Association for Challenged and Enabled Students (ACES), a group dedicated to breaking down stereotypes and eliminating discrimination against those with disabilities. ACES sought to educate the non-disabled public about the challenges people with disabilities face. During the years at Peru State College Amy began working with women and children who experience domestic violence, a field to which she still devotes time when she can. She served as a volunteer counselor for a nonprofit in Southeast Nebraska and other agencies. She has worked tirelessly as an advocate, role model, and leader for both women and the blind. She attributes her success with blind people to her discovery of and involvement in the National Federation of the Blind.

In 1993 the NFB of Nebraska established a scholarship program, and Amy won that first scholarship. With this award she faced a turning point in the evolution of her personal philosophy and in her affiliation with the National Federation of the Blind. Growing up, she had been warned that the NFB was an organization of militants whom she should avoid. Thanks to the scholarship program, Amy attended her first state convention in the fall of 1993, discovered the warmth of the members of the NFB and the important work we are doing, and hasn't looked back since.

In fact, the very next year, in October of 1994, Amy and a handful of other concerned blind Nebraska students were granted the charter for the Nebraska Association of Blind Students within the Nebraska affiliate. She was elected president of the student division, an office she held for two years.

Since those early days in the Federation, Amy has held a number of chapter and affiliate positions in Nebraska. In 2003 she was elected to serve as affiliate president, and in the summer of 2006 she was elected by the national convention to the board of directors of the National Federation of the Blind.

Amy and her husband Shane (a leader and dedicated Federationist in his own right) live in Lincoln with their son Noah (born May 2, 2006). She is employed as a rehabilitation counselor with the Nebraska Commission for the Blind and Visually Impaired.