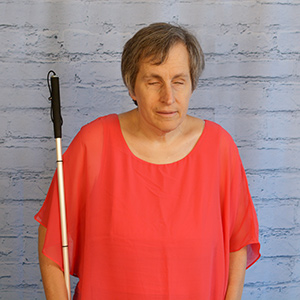 Amy Ruell explains that while growing up in Longmeadow, Massachusetts, she had little contact with blind people, the exception being through a camp for the blind she attended as a child. She was educated in public school but received minimal instruction in cane travel and no professional Braille instruction. She mastered Braille with the help of her mother and a volunteer, both staying a lesson ahead of her as the instruction proceeded.

Amy obtained Bachelor of Arts and Master of Science degrees from Smith College and Simmons College School of Social Work, respectively, and has been successfully employed as a therapist, supervisor, and, most recently, as a clinical care manager authorizing psychiatric emergency admission.

Amy discovered the Federation when her job as the literacy program manager for an initiative at National Braille Press required that she attend the conventions of several national organizations of the blind. At the NFB's gathering, she found people doing things for themselves and at the same time helping others get around the hotel, read menus, and do so many other things in a wonderful spirit of mentorship and cooperation.

When she first joined, her intent was to be a good member but not to become overly involved. But, when she saw things that needed changing, she realized her choice was "to lead or to shut up." She concluded that leading was a task more suited to her character and temperament. She was elected as the vice president of the Massachusetts affiliate shortly after joining the NFB, and also has served as the vice president of the Cambridge chapter and the convention coordinator for the affiliate. She was elected president of the Massachusetts affiliate in 2014, and to the Board of Directors of the National Federation of the Blind in 2017.