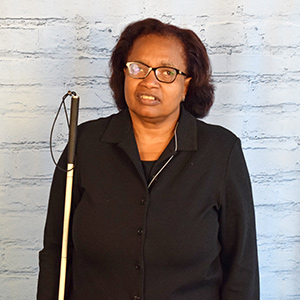 Denise Avant was born in Chicago in 1958 and was raised by a single mother in an impoverished neighborhood. She had vision problems from birth and was ultimately diagnosed with Liber's congenital blindness. She attended a public elementary school with programs for blind students and was initially included in its "sight saving" classes, where she used large print. But in eighth grade her TVI advised that she should learn Braille in order to prepare for college. She was also given cane travel lessons starting in the spring of seventh grade, so that she could travel to school using the bus. At the time, she was given a specific route to follow in order to avoid street crossings. Later, she would learn how to use Chicago's public transportation system from blind friends to go shopping, attend movies, and engage in other adventures throughout her home city.

Ultimately, we must all work to continue to change the low expectations and negative attitudes that society has about the abilities of blind people. Laws are important, but our real goal has to be changing hearts and minds.

Although Denise started to learn Braille in high school, she initially was not proficient and still relied primarily on large print or on her TVI's to read assignments to her. But as she continued to lose vision, especially in low light, she decided that more Braille training would relieve the worry of whether or not she could read print in a given situation. In order to gain more Braille proficiency, she received six weeks of intensive Braille training provided by the Illinois Department of Rehabilitation Services in downtown Chicago in the summer between her freshman and sophomore high school years.

Denise attended college at the University of Missouri at Columbia, originally intending to pursue a journalism major but choosing a political science degree instead (She would ultimately receive a masters in journalism from Roosevelt University in 2003). She took an undergraduate course in constitutional law and enjoyed it so much that she decided to go on to law school. She stayed at the University of Missouri because she had established residence and rehabilitation funds for her education were therefore available, but decided to return to Chicago to pursue her legal career, since she already knew that public transportation was more than adequate there. Her first job was with Will County Legal Aid in Joliet, a two-hour commute from home, but she applied at a job fair for a position with the Cook County Public Defender, and got the job. Assigned to the appellate division, where she handled appeals and post-conviction proceedings for people accused of a wide range of misdemeanor and felony offenses, Denise worked for the public defender for thirty years, retiring on August 31, 2017. She had further developed her Braille skills in college and law school by learning to take notes with a slate and stylus. While working in Joliet, she acquired a VersaBraille, and then ultimately graduated to the full-time use of a computer. Her Braille skills proved indispensable for conducting oral arguments in court. Her computer skills allowed her to prepare her own briefs and conduct legal research as she dealt with more responsibility and a heavier caseload due to her steady advancement in her career.

Denise knew of the National Federation of the Blind long before she joined in 2005. She had even attended a few conventions and taken advantage of contacts and resources provided by the National Association of Blind Lawyers. But she didn't think of herself as a joiner and had little interest in being a part of an organization that, she had been told, was made up of mean-spirited, radical extremists. But the people she met and the organization she came to know were nothing like what she had heard. "I attended my first Chicago Chapter meeting in 2005, and I've missed very few since then," she says. In fact, she served on the chapter's public relations committee and then became its second vice president. She says, "I appreciated the Federation because it was a place where blind people were respected and our opinions were truly heard and really mattered." But the real turning point in her involvement came when she was invited to a leadership seminar in August of 2010. At that gathering, she realized for the first time that the success she had achieved in her life and career had been made possible by the work of the National Federation of the Blind. "The rehabilitation services and financial aid that I had access to, the technology I was able to acquire and use, and the barriers that had been overcome by other blind people before I started my career: all of those things happened because of the National Federation of the Blind, although I didn't realize it at the time," she says.

Denise had been asked before by Illinois affiliate president Patti Chang whether she would consider succeeding Patti in that position, but Denise had always declined. After the leadership seminar, however, she told Patti that she was interested in serving as president. Denise was elected to her first term as president of the National Federation of the Blind of Illinois in 2014. She was re-elected in 2016, and was elected unanimously to the national board of directors in 2017.

Denise has worked hard for most of her life; she had summer jobs from the age of fifteen until she began her full-time career. She now looks forward to having more time to enjoy cross-country skiing, running, and reading. She and a group of friends have formed a small club called the Visionnairies, which helps local institutions and charities related to blindness. And of course, she remains committed to the work of the National Federation of the Blind. "Ultimately, we must all work to continue to change the low expectations and negative attitudes that society has about the abilities of blind people," she says. "Laws are important, but our real goal has to be changing hearts and minds."