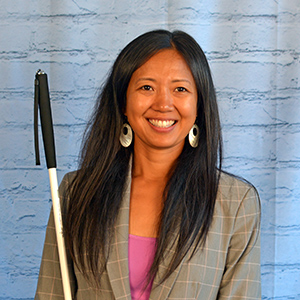 Terri Rupp was born in a refugee camp in Thailand and came to the United States with her parents, who were fleeing the communist Pol Pot regime in Cambodia, when she was not yet two years old. The family eventually settled in Fairfield, California, where Terri’s parents established a successful donut shop. By the time she began studying sociology at Sacramento State University, Terri found it virtually impossible to rely on reading large print and the other “tricks” she had been using to cope with her progressive vision loss due to optic nerve atrophy, which had been diagnosed when she was around five. Struggling with her studies and seeking employment, she took a job with the Society for the Blind in Sacramento, where she first encountered positive blind role models. She also attended her first NFB chapter meeting and state convention. Meeting Rosy Carranza and Joanne Wilson at the convention solidified Terri’s decision to attend the blindness skills training program at the Louisiana Center for the Blind.

I truly live the philosophy every single day that blindness is not the characteristic that defines you. It is my life goal to be a positive role model, kicking obstacles out of the way so that those who come behind me have a smoother road to run on.

Within a couple of years of beginning training at LCB in 2006, Terri attended her first Washington Seminar and a national leadership seminar; won an NFB national scholarship; married her college boyfriend Aaron and moved to Las Vegas, where he worked as a paramedic; interned at the NFB Jernigan Institute; and was elected first vice-president of the National Association of Blind Students. In 2008 she was elected to the presidency of both NABS and the NFB of Nevada. “Unfortunately, I ended up doing too much too soon and was very overwhelmed with both leadership roles, finishing up my degree, and becoming a new mom in 2009,” Terri says. So, between 2009 and 2014, she stepped away from the Federation to focus on her family. During that time, she also organized local neighborhood mommy groups and brought together hundreds of moms and children.

Then her daughter Marley was diagnosed with Terri’s same eye condition, and Terri knew just what to do: she once again reached out to her extended family in the National Federation of the Blind. “Changing what it means to be blind had a deeper meaning for me now that I was not just a blind mom, but a mom to a blind child,” she observes.

Since becoming active in the NFB again, Terri has easily stepped into leadership roles. She served on the national board of the National Organization of Parents of Blind Children from 2015 to 2016. She was then elected to serve as president of the National Federation of the Blind of Nevada, for the second time, in 2016. Finally, at the national convention in 2019, she was elected to serve on the NFB board of directors, which was especially meaningful given that the convention was in her hometown of Las Vegas.

“In addition to all of the things I do with the National Federation of the Blind, I’m grateful to be able to be a stay at home mom to my two children, Jackson and Marley, ages eight and ten, and happily married to my supportive husband of twelve years,” Terri says of her life now. “Our family loves adventuring together, especially on our multi-state, multi-week summer road trips. I am a marathon runner and have run the Las Vegas Rock ‘n’ Roll Marathon and the St. George Marathon. It is my goal to run one marathon a year as long as I am healthy enough to do so. In 2019, I joined the teaching staff at Blind Connect Angela’s House, a recipient of a 2019 Dr. Jacob Bolotin Award. I teach Braille and one-touch self-defense to newly blind adults there twice a week. On top of everything else that I do, I enjoy writing and have been the author of the blog Blind Mom in the Burbs since 2012. I openly share about my trials, travels, tears, and triumphs as a stay at home mom in the suburbs of Sin City. Blind Mom in the Burbs has gotten national recognition. I was profiled in Good Housekeeping in October of 2018 and invited to speak at the Kellogg’s headquarters in February 2019. I’ve even been published in a social media piece for my favorite running shoe. I truly live the philosophy every single day that blindness is not the characteristic that defines you. It is my life goal to be a positive role model, kicking obstacles out of the way so that those who come behind me have a smoother road to run on.”