Miami, Florida (February 26, 2019): Janice A. Bartleson, PhD, a blind counselor and emotional/behavioral disabilities clinician employed by Miami-Dade County Public Schools (M‑DCPS) for more than twenty-seven years, has settled the lawsuit she filed against the school board last spring with the support of the National Federation of the Blind. Dr. Bartleson brought the lawsuit because she was unable to use the school system’s websites, web forms, and software applications that were inaccessible to her. 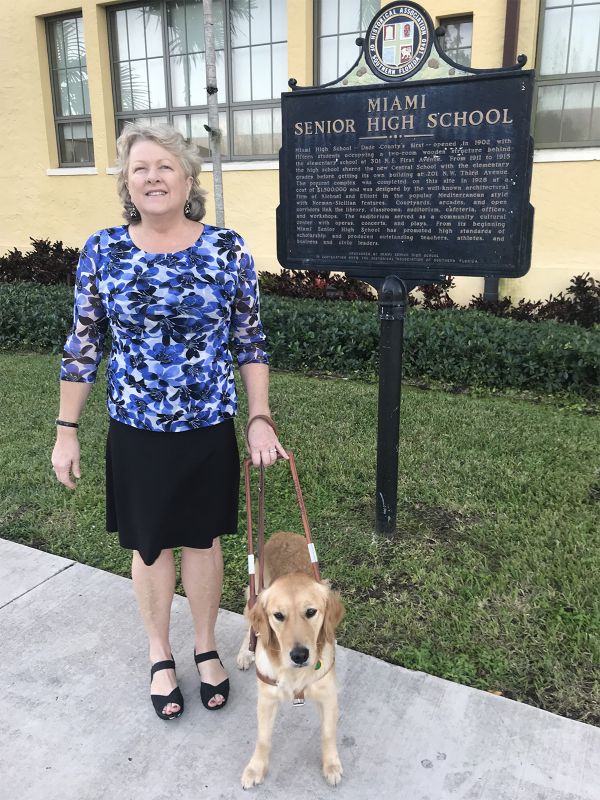 A federal court has approved a consent decree requiring M-DCPS to make all existing websites, forms, and software accessible; to procure only accessible software in the future; and to take other steps to ensure the full inclusion of blind employees in school programs and activities. The school system will also pay a total of $250,000 to Dr. Bartleson and her attorneys.

Like other blind people, Dr. Bartleson accesses information on her computer using screen-reader technology, which renders digital content as spoken words using synthesized speech or by displaying it on an attached refreshable Braille display. Improperly coded websites and software prevent screen readers from accurately verbalizing critical information, such as what information must be typed into an edit box on a form. Dr. Bartleson’s lawsuit alleged that she was forced to rely on irregular assistance from a sighted coworker to perform tasks as basic as inputting student progress notes and accessing her own employment benefit information. Furthermore, she knew that she could not apply for promotional opportunities given the inaccessible software utilized by M-DCPS. The consent decree requires all websites, web forms, and software used by M-DCPS to be made accessible within four years, with priority given to the specific technology that Dr. Bartleson must use on a daily basis. In the meantime, Dr. Bartleson will have scheduled, dedicated assistance to complete the tasks for which she must use inaccessible webpages, web forms, and software.

“Equal treatment and equal opportunity in the workplace also means full and equal access to technology,” said Mark Riccobono, President of the National Federation of the Blind. “Making on-the-fly accommodations after inaccessible technology is put in place is neither adequate nor lawful. The National Federation of the Blind therefore commends the Miami-Dade County Public School board for committing to a fully accessible workplace, and we look forward to our collaboration with the school board to make this a reality. We will continue to fight for the rights of all blind employees until artificial barriers to inclusion and success no longer threaten the dignity and livelihood of blind workers.”

“This consent decree means a great deal to me personally, but it is also a critical step toward the creation of a level playing field for blind employees of M-DCPS,” said Dr. Bartleson. “I also hope and believe that it will lead to equal access for blind students of the school system and for blind parents with children attending school in Miami-Dade County.”

Dr. Bartleson is being represented with the assistance of the National Federation of the Blind by Sharon Krevor-Weisbaum, Chelsea Crawford, and Anthony May of the Baltimore firm Brown, Goldstein & Levy LLP, and by Matthew W. Dietz of Disability Independence Group, Inc. of Miami, Florida. For more on this case and other legal actions, projects, and investigations of the National Federation of the Blind, visit nfb.org/legal.

About the National Federation of the Blind
The National Federation of the Blind (NFB), headquartered in Baltimore, is the oldest and largest nationwide organization of blind Americans. Founded in 1940, the NFB consists of affiliates, chapters, and divisions in the fifty states, Washington DC, and Puerto Rico. The NFB defends the rights of blind people of all ages, and provides information and support to families with blind children, older Americans who are losing vision, and more. We believe in the hopes and dreams of blind people and work together to transform them into reality. Learn more about our many programs and initiatives at nfb.org.