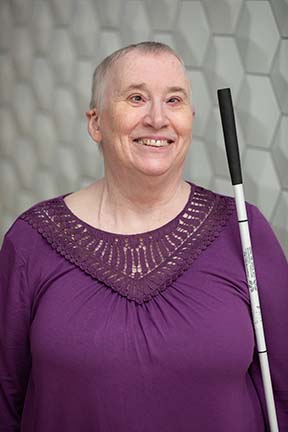 Marci Carpenter was born in 1959, the youngest of three children gifted to Rodney and Betty Carpenter. It was clear early on that her vision was limited. Within a month the family realized her eyes were not tracking. That being acknowledged, the message about whether she was blind was slow in coming and frustratingly unclear. That lack of clarity would be a problem during many of Marci's formative years, but she believes every experience has value in helping to form character and in understanding her fellow human beings.

Marci's father loved to fish, and she loved it as well. He also shared his love of professional football with her, and these created a tremendous bond between them for which she will be eternally grateful. Fishing is but one of many outdoor activities she remembers. Being a person who spends quality time outside is very important to her. Walks are a way of relieving stress, but just the wind and the sun are a part of her life balance that includes enjoying and being thankful for nature.

As much as she needs and enjoys physical activity and being outside, Marci also is a lover of books, and reading is one of her major pastimes. It has taken her to places and given her experiences through the adventures of others that she has been able to incorporate into her life. She credits reading with helping her appreciate and respect differences in people, respect their cultures, and do so with acceptance and a real appreciation of who they are and the values they hold dear.

Marci remembers loving elementary school, but as she went through the experience of public education, she met with the taunts that our not-so-innocent children are masters at delivering. When she was teased and bullied at school, she was told not to take nicknames such as Blindy, Bat, and Four Eyes seriously because, after all, she was not blind; she just couldn't see as well as some. But, when it came to attending little league softball games, she was told she might be injured because, being blind, she couldn't duck or get out of the way of foul balls.

These contradictions were apparent in what her parents wanted from her and from her school. They wanted her to learn Braille, but for her to use a cane was out of the question. When she took a typing class, she could read from a large print book and type the material, but when the teacher put things on the board for transcription, Marci could not read them. Though she suggested alternatives, Marci was told that since she could not do the work in the way it was prescribed, she should immediately leave the class. This was the year after the passage of landmark legislation known as Public Law 94-142 but before regulations were in place. Though no one was happy with Marci's expulsion, she was not encouraged to be an advocate, and no one stepped forward to demand what would have been a reasonable accommodation. The term wasn't yet in law or regulation, but the concept made sense long before it was recognized as a legal mandate.

Interestingly, when the physical education teacher decided there was no place for Marci in his class, her parents decided to fight back, and alternatives in which she could participate were adopted. This was yet another contradiction for Marci to reconcile: why was there fighting for accommodations in one class and a passive acceptance in one that might be equally important?

Marci was drawn to involvement in public activities by her mother's work in their community. The family matriarch created a park, helped get funding for a historical society, and later was instrumental in the creation of a museum. With this family tradition and orientation, in third grade Marci had her first opportunity to move onto the public stage and do public speaking, her talk being about the magnifiers she used in class. The hope was that better understanding in the student body would mean less bullying, and the chance to address her schoolmates would bolster her self-confidence. The latter came to pass, but the abuse remained a problem.

Even with the adversity, Marci was determined to remain positive and active. At the request of her class, in her freshman year she went to the school's principal and asked permission for the school to host a parade. The principal agreed but said it would take the concurrence of the city council to close off several of the town's streets. Marci went before the council, got permission, and the parade was a success.

Primarily as a result of blindness and the ambiguity about whether or not she was blind, Marci developed contradictory feelings about school. In a place down deep, she loved it; but with the bullying and the denials, she remembers wanting to flunk out, get it over, be done with the conflict. Given that it was always assumed she would go to college, there wasn't much of a future in acting on the emotions that came from the hurt in her heart that urged her to give up and quit. Her feelings about school were further complicated by the fact that she easily made good friends, and the mutual benefit they provided was a source of real joy.

In high school she remembers going to school games on the bus the school provided for the team's rooters. In getting off at the event, she soon learned that if she ran to keep up with her classmates, she might stumble and get unwanted attention. If she didn't run, she would fall behind and never find her group at the game. Running was the better of two bad choices, but again she did not tell her friends she was blind because she wasn't sure where she fit in the world of the blind and the somewhat sighted.

Even with her intelligence and enthusiasm, Marci realized her academic performance was hampered. In working on a senior term paper, she found that notes she quickly wrote were unreadable. She needed more than print; she really did have a significant problem, but blindness still wasn't the word she and others would use to identify it.

Her first work with any blindness entity was with the Hadley School for the Blind and the correspondence course in typing that would substitute for what she had been denied. After that came rehabilitation through the Washington Commission for the Blind. There she received good skill training, but the program did not fundamentally tackle the way she felt about herself. Although she read speeches by Dr. tenBroek and Dr. Jernigan while there, it wasn't until 1981 that she met the National Federation of the Blind. Here she came to understand that both skills and attitude figured into what life could be for blind people and that she was indeed a blind person. These Federationists were suggesting she was blind and that was okay. "These people took me from thinking of myself as a broken sighted person to a proud blind person. It is hard to put into words the difference in those two perspectives. One leaves you feeling you want to be invisible; the other makes you say, I'm a normal, capable woman, and I'm here to live, compete, and be seen for the full human being I am."

Marci has had her share of disappointments in looking for jobs. She once applied for a job preparing food. The requirement was to take food from a freezer, place it in a microwave oven, and then sell it to the waiting customer. She was denied on the grounds she might slip and fall. That rejection didn't stop her. In the paid job she values most, she worked in the University of Colorado disability services office. She helped students gain needed resources and is proud that she brought to that job the philosophy of the National Federation of the Blind: ask only for what you need, and since you are the person with the most to win or lose, do for yourself whatever you can. Don't let your success depend on the work of others. She emphasized to students that any skill learned in college would prepare them to be better employees, teaching them to deal with an ever-changing world and giving them practice at the "think outside the box" paradigm required of so many successful blind people.

One message Marci would like to communicate is that she is not what the stereotypic Federationist is portrayed to be. She does not hold some highly prestigious job requiring multiple undergraduate and graduate degrees. She has multiple disabilities including hearing loss, asthma, and Essential Trimmer disease, which is similar to Parkinson's in its manifestations. She deals with chronic depression and wrestles with anxiety, but she demonstrates that none of this stops her from living an active and happy life with her husband Raymond Spicer, partners and soulmates since 2007. She was elected president of the National Federation of the Blind of Washington in 2014, and canvasing affiliate members reveals they couldn't be happier with their choice. She leads by example, leads with wisdom, leads with compassion, and leads by emphasizing that there is nothing more important than clear and frequent communication.

Marci is particularly proud of the role she has played as a part of the National Federation of the Blind Survivor Task Force. As a person who has suffered from sexual and emotional abuse, she knows the feelings, relates to the stories, and provides a path leading to hope and healing. "This has taken more time over the last year than I thought it would, but I consider it time well spent. I want people to know that we listen to them, we believe them, and we intend to make our organization better as a result of experiences expressed through their stories."

When asked what she would like to say about her life and her work in this organization we share, Marci says: "I am a testament to the fact that what people think it takes to be a leader in the Federation is way too narrow. As I mentioned during my acceptance speech at the 2021 National Convention, I was out of the Federation for about a decade, but when I came back, I was welcomed with open arms. All of my experiences make me certain that the Federation is more needed today than ever before. I'm proud to be a part of it, and I urge those who think that they can't become a part to think about my life, my contributions, and how they might follow a similar path. We must go forward together, and through the organization we nurture and support, this is exactly what we will do."