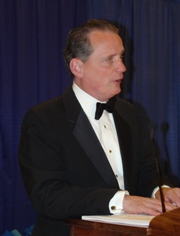 Born in 1951, Marc Maurer was the second in a family of six children. His blindness was caused by overexposure to oxygen after his premature birth, but he and his parents were determined that this should not prevent him from living a full and normal life.

He began his education at the Iowa Braille and Sight Saving School, where he became an avid Braille reader. In the fifth grade he returned home to Boone, Iowa, where he attended parochial schools. During high school (having taken all the courses in the curriculum), he simultaneously took classes at the junior college.

Maurer ran three different businesses before finishing high school: a paper route, a lawn care business, and an enterprise producing and marketing maternity garter belts designed by his mother. This last venture was so successful that his younger brother took over the business when Maurer left home.

In the summer of 1969, after graduating from high school, Maurer enrolled as a student at the Orientation and Adjustment Center of the Iowa Commission for the Blind and attended his first convention of the NFB. He was delighted to discover in both places that blind people and what they thought mattered. This was a new phenomenon in his experience, and it changed his life. Kenneth Jernigan was director of the Iowa Commission for the Blind at the time, and Maurer soon grew to admire and respect him. When Maurer expressed an interest in overhauling a car engine, the Commission for the Blind purchased the necessary equipment. Maurer completed that project and actually worked for a time as an automobile mechanic. He believes today that mastering engine repair played an important part in changing his attitudes about blindness.

During law school Maurer worked summers for the office of the secretary of state of Indiana. After graduation he moved to Toledo, Ohio, to accept a position as the director of the Senior Legal Assistance Project operated by ABLE (Advocates for Basic Legal Equality).

In 1978 Maurer moved to Washington, DC, to become an attorney with the Rates and Routes Division in the office of the general counsel of the Civil Aeronautics Board. Initially he worked on rates cases but soon advanced to dealing with international matters and then to doing research and writing opinions on constitutional issues and board action. He wrote opinions for the chairman and made appearances before the full board to discuss those opinions.

In 1981 he went into private practice in Baltimore, Maryland, where he specialized in civil litigation and property matters. But increasingly he concentrated on representing blind individuals and groups in the courts. He has now become one of the most experienced and knowledgeable attorneys in the country regarding the laws, precedents, and administrative rulings concerning civil rights and discrimination against the blind. He is a member of the Bar in Indiana, Ohio, Iowa, and Maryland and a member of the Bar of the Supreme Court of the United States.

Maurer has always been active in civic and political affairs, having run for the state legislature from Baltimore. Through the years he has also served on the board of directors of his apartment complex's tenants association, the board of his community association, and the school board of his children's school. In 1981 Maurer was elected president of the National Association of Blind Lawyers and served in that office until 1985. From 1984 until 1986 he served as president of the National Federation of the Blind of Maryland.

An important companion in Maurer's activities and a leader in her own right is his wife Patricia. The Maurers were married in 1973, and they have two children—David Patrick, born March 10, 1984, and Dianna Marie, born July 12, 1987.

At the 1985 convention in Louisville, Kentucky, Kenneth Jernigan announced that he would not stand for re-election as President of the National Federation of the Blind the following year, and he recommended Marc Maurer as his successor. In Kansas City in 1986 the Convention elected Maurer by resounding acclamation. From 1997 to 2000 he also served as president of the North America/Caribbean Region of the World Blind Union, and he chaired the WBU Committee on the Restoration of the Louis Braille Birthplace in Coupvray, France. In 2004 he became vice president of the World Blind Union North America/Caribbean Region, and in 2006 reassumed the presidency.

Maurer was honored with the Maryland Black Caucus's Leadership Award in 1985, the United States Presidential Medal for Leadership in 1990, the 1990 Heritage Award from the Canadian National Institute for the Blind, and the Baltimore Business Journal's 1999 Innovation Award for Excellence in Workplace Technology. Additional honors include the 2002 VME Robert Dole Award and the Daily Record's 2002 Innovator of the Year award. He joined President George W. Bush in the Oval Office in July of 2001 to celebrate the success of the NFB Everest expedition and once again when President Bush signed into law the Help America Vote Act of 2002. He received honorary degrees from California's Menlo College in 1998 and the University of Louisville in 1999. In 1987 he delivered an address at the Kennedy School of Government at Harvard University, and in 2000 he was invited to deliver addresses on civil rights at Oxford University and Birmingham University in the United Kingdom.

Maurer's unswerving determination to succeed and his absolute conviction that the organized blind are the best-equipped people to solve the problems facing them set the tone for the organization into an exciting new period of growth and accomplishment.