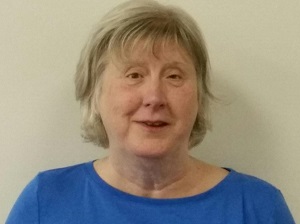 Norma Beathard was born on January 25, 1956, in Conroe, Texas. She was the first of five children born to Robbie and Joseph Beathard. Norma was born legally blind because her mother contracted rubella during her pregnancy; however, Norma’s blindness remained undetected until she began walking. At that time her parents began to notice that she seemed to bump into things that a sighted child should see, and they had her vision tested. A determination was made that she was blind when she was two years old. Years of surgery followed with no improvement.

Norma was an active child. She joined her siblings in most of the games they played, and her blindness was not a real obstacle when she was small. But she couldn't read the blackboard when she started school, and she experienced a number of problems related to her vision as she grew older.

Norma always attended school in rural communities, a circumstance which she describes as “both a blessing and a curse.” Because no one in her life knew anything about blindness skills, she wasn't able to learn Braille or cane travel. She used large print books, which were bulky and heavy for a tiny girl. Since her vision was extremely limited, she had to read with her nose practically touching the pages of her books, even though the print was enlarged. Despite the lack of training in blindness skills, Norma feels that she received a quality education because she had caring teachers who always found ways of making it easier for her to learn. She was fortunate to have the same teacher from her first grade year through her third grade year, and that teacher was determined that Norma would be included in everything the class did. Her name was Jean Todd, and she spent countless hours offering Norma one-on-one instruction. Other teachers with similar attitudes were a part of Norma's life throughout her K-12 experience.

Professionals in the field of work with the blind were not as helpful. When Norma asked for Braille training, she was told by a rehabilitation professional that she was wasting his time, and she was made to feel guilty because, according to him, she was depriving a “real” blind person of the opportunity to learn by making this frivolous request. Eventually she was able to convince him that he should provide her with training, and he traveled to her small town and spent two hours with her. This was woefully inadequate, but it did allow her to learn the alphabet, Braille numbers, and some punctuation symbols. Her experience with inadequate Braille training has made Norma a strong advocate for providing Braille education to children with low vision.

After completing her education, Norma found herself living in a small community with no opportunities for a blind person. She knew she had to leave her rural home if she was to become successful. Her father was opposed to her leaving, but her mother understood that a different environment would provide Norma with a better chance of living the life she wanted to live. So she took the unusual step of going against the wishes of Norma's father; drove Norma to the bus station in Lufkin, Texas; and purchased a ticket to a better life for her daughter. Norma traveled to Austin that day, and although she had no idea what she would do to become successful, she was confident that she would be able to make a life for herself.

Norma began her working life as an employee at the Travis Association for the Blind. That employment did not last long because Norma found that she couldn't live on the $1.05 an hour that the sheltered workshop was paying its trainees, and her questions about how to make a higher wage went unanswered. In fact, it became clear that she was unlikely to be paid the federal minimum wage anytime soon, so Norma began to look for other work. She also married during this time and began a family. Her first son was born on March 10, 1976, and her second son was born on March 10, 1978. Once her children were out of diapers, Norma started work at the Texas School for the Blind. She worked as a dorm parent at the school from 1979 to 1982.

After a divorce Norma found the National Federation of the Blind and became an active member in 1983. By 1985 she was living in Houston, and she was an important part of the National Federation of the Blind of Texas leadership. She didn't hold elective office in the Federation, but she worked hard to help the affiliate president and other leaders to carry out the organization's mission. She became president of the Houston Chapter in 1989, and she continued in that role for eight years.

When Norma joined the Federation, she met Glenn Crosby. Glenn was serving as president of the National Federation of the Blind of Texas, and as the two worked closely together, a personal relationship developed. They were married on April 15, 1989. Each of them had two children, and the two families have blended into a harmonious group. Glenn and Norma are now the proud grandparents of seven grandchildren, ranging in age from three to twenty.

Four years before they married, Glenn asked Norma to begin managing the office for his food service business, and they became professional partners. The Crosbys owned five food service locations during the late 1980s and early 1990s, but they sold all but two of the locations and were operating those two locations when they retired in 2013.

Though both Norma and Glenn grew up in Texas, they decided they wanted a change in 2001, and they spent about a year in South Dakota. Then they spent several months in Ajijic, Mexico. Ajijic is near Guadalajara, and, while they enjoyed their time there, they needed to be closer to home for business reasons. So in 2005 they moved to Ruston, Louisiana. Shortly after arriving in Ruston, Norma was elected to serve as president of the North Central Chapter of the NFB of Louisiana. She remained in that position until January of 2009, when she and Glenn made the decision to move back to their native Texas. They now live in Alvin, near Houston, on four acres of land and have a few cows.

In 2012, Norma was chosen to serve as the first president of the Lone Star Chapter of the National Federation of the Blind of Texas. Then, at the affiliate's 2014 convention, she was elected to serve as the state president. While Norma believes strongly that it is not necessary to hold an office in order to be an effective leader, she is honored to serve as both the president of the NFB of Texas and, since her election at the 2015 National Convention, as a member of the organization's national board of directors.