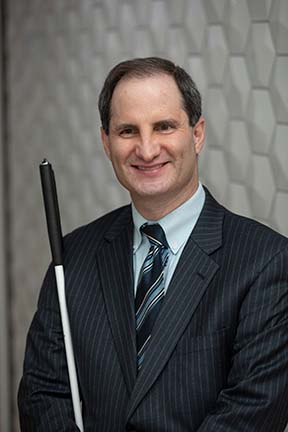 Tracy Soforenko grew up in Rhode Island as the youngest child of a high school teacher.  He attended the University of Pennsylvania, graduating in 1991 with degrees in finance and psychology. Each summer, he worked long hours to pay tuition and expenses. He noticed difficulty with driving and scheduled an eye exam only to find out he was experiencing rapid vision loss due to retinitis pigmentosa. After college graduation, Tracy moved from Philadelphia to Washington, DC and started a career in technology and business consulting, serving financial services, retail, and publishing industry customers across North America. Tracy’s career evolved from consulting to becoming a project manager for the federal government, where he managed large customer service and financial technology projects for the Corporation for National & Community Service and the Pension Benefit Guaranty Corporation.

He and his wife Sharon were married in 1995 and moved to Arlington, Virginia in 1997. As his career progressed and family responsibilities expanded with two daughters, Tracy desperately needed to learn alternative nonvisual techniques to do his job, raise his children, and be involved in the community.  He needed positive blind role models, a new mindset on blindness, and a way to contribute to the community. He found his local National Federation of the Blind chapter and was immediately put to work.

Through the Potomac Chapter of Virginia, Tracy ran fundraising activities, was involved in mentoring students, and attended his first NFB National Convention in 2005. The experience was transformative, and he started developing youth programming, running the Virginia program to help first time convention attendees, directing legislative advocacy in Richmond, and taking on other leadership roles. He served as president of his local chapter and as a vice president of the Virginia affiliate before being elected president of the Virginia affiliate in 2016. Tracy’s enthusiasm for the national convention led him to serve as chair of the Kenneth Jernigan Fund. Tracy expanded programs for youth in the Virginia affiliate, leading to the creation of Project Resilience, Independence, Self-Advocacy, and Employment (Project RISE) in 2017. This thriving program now serves thirty-five students with a team of thirteen staff and mentors. This fall, the Virginia affiliate is launching a program to share alternative techniques and Federation philosophy with sixty blind and low-vision seniors through the Virginia Silver Bells program.  Finally, Tracy has expanded engagement in legislative advocacy at a state and national level, with nearly one hundred members participating in legislative advocacy in Richmond and forty participants in Washington Seminar.

In 2021, Tracy was elected to serve as a member of the National Federation of the Blind Board of Directors.

Tracy, his wife Sharon, and their two daughters still live in Arlington, Virginia. He loves to hike, participate in his local Toastmasters Club, and cook.