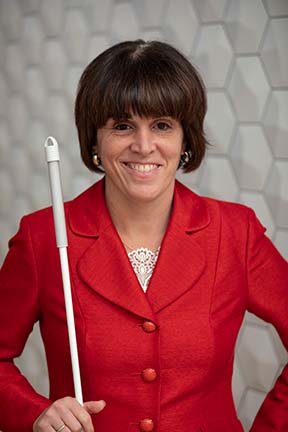 Pam Dubel was born in 1970 and grew up in Lancaster, New York. She became blind when she was approximately two years old as a result of retinal blastoma, a type of cancer. Although her parents were shocked by her loss of sight, they fortunately realized that she was still the same child except that she could no longer see. Through love and high expectations, they instilled in Pam a sense of pride and confidence in her ability to succeed. They constantly taught her that her blindness was not a limitation to achieving her goals and dreams. Growing up as the youngest of six children also helped her learn to be independent. Since she was the youngest, nobody, especially the brother a year older than she, let her get away with anything. Pam attended a private Catholic school, where she was the only blind student. Her itinerant teacher provided a sound foundation in Braille, which helped her excel in academics. Her parents expected her to do her best and to engage in activities that would make her a confident and well-rounded person. She participated in horseback riding, skiing, and cheerleading during elementary school. During high school her interests shifted to performing in chorus, doing community service, and having fun with her friends.

Being elected to the national board has allowed me to give back and to spread the message of our movement. It is an incredible honor and privilege to serve!

While growing up, Pam had limited contact with other blind people her age. In general she had no desire to associate with other blind people. She understood that every high school senior experiences some trepidation about the transition to adulthood and independence. However, as high school graduation approached, she began to grapple with questions that her sighted peers couldn't answer. She planned to attend college, and she hoped that she would eventually find a job, but she secretly wondered if she would truly be able to obtain employment. After all, she had had difficulty finding part-time work during high school. Her loving family and friends encouraged her, but she had questions that went unanswered. Although she entered college with some apprehension, she was determined to achieve her best. Her small liberal arts college provided an exciting environment in which to learn and grow. But those unanswered questions continued to nag at her. If people were amazed that she could accomplish the most insignificant tasks, would they ever treat her as an equal? She realized that she had to meet other blind people with more experience than she who could serve as role models.

Her search exposed her to a wide variety of groups and organizations of and for the blind. However, not until she attended a student seminar hosted by the National Federation of the Blind of Ohio did she begin to find the answers for which she had been searching. Although she didn't realize it at the time, that seminar marked the beginning of a new chapter of her life. She met Barbara Pierce, president of the NFB of Ohio, who told Pam about the Louisiana Center for the Blind. More than that, she spoke with Joanne Wilson, its director, who arranged for Pam to complete an internship at the center the following May. As soon as that was completed, Joanne invited her to work as a counselor in the children's summer program that year.

Pam was a 1991 National Federation of the Blind scholarship winner when she was a senior at Denison University, where she majored in psychology and minored in women's studies. She served as vice president of the Ohio Association of Blind Students and as secretary of the National Association of Blind Students, and throughout college she worked summers for Joanne Wilson at the Louisiana Center for the Blind with the Children's Program.

After graduation from college Pam decided to become a student at the Louisiana Center for the Blind. She recognized that she still needed to gain some confidence in her skills and in her ability to be a successful blind person.

Since 2001 Pam Allen has served as the director of the Louisiana Center for the Blind, one of three NFB adult rehabilitation centers. Prior to becoming the director, she served as the director of youth services, working with blind infants and toddlers and their parents, supervising the training of classroom aides to teach Braille throughout Louisiana, coordinating summer camps, and developing innovative programs for blind children and teenagers.

People often ask her what makes the Louisiana Center for the Blind such a special place. She responds, "What sets our alumni apart from those of other kinds of rehabilitation facilities? The answer is that, by attending our center and the other centers conducted by Federationists, students are exposed to the National Federation of the Blind and its philosophy. The NFB is more than an organization; it is a loving family. Regardless of where you are, you can find members of the NFB who can give you support and encouragement when you need it. The NFB also provides a constant supply of mentors and role models who challenge you to set goals for yourself. Lives are positively changed every day at the Center because of the philosophy of the NFB."

Allen recalls that she used to believe that she did not need other blind people. She thought that being independent meant succeeding without the help of others. Her involvement with the National Federation of the Blind has taught her that this is not true. She has learned that she needs reinforcement from her blind colleagues and friends.

Pam lives in Ruston, Louisiana, with her husband Roland Allen, a dedicated Federation leader and a gifted orientation and mobility instructor at the center. She is currently the president of the NFB of Louisiana and secretary of the National Association of Blind Rehabilitation Professionals. In July of 2002 she was elected to the National Federation of the Blind board of directors. Four years later, in 2006, she was elected to serve as treasurer of the National Federation of the Blind. In 2012, Pam and Roland received the prestigious Jacobus tenBroek Award in recognition of their distinguished service in the Federation. In 2015, Pam was elected as first vice president of the National Federation of the Blind. Allen is also involved in a variety of community and professional organizations, including the Chamber of Commerce and as a gubernatorial appointee to the Louisiana Rehabilitation Council.  She says, "Being elected to the national board has allowed me to give back and to spread the message of our movement. It is an incredible honor and privilege to serve!"