Woman to Woman: Keeping the Federation Fire Burning in Illinois

Woman to Woman: Keeping the Federation Fire Burning in Illinois 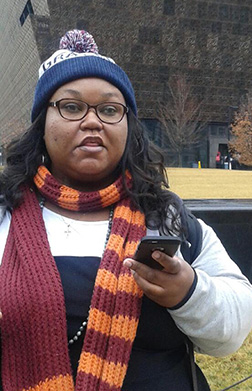 Denise Avant and I were brought together in 2016 by my interest in attending law school. However, today our love for the National Federation of the Blind is what grounds us as leaders in this awesome evolution to change what it means to be blind. Denise tells me that it was my passion, intelligence, and energy that prompted her interest to mentor a new member, but it was my instant grasp of our philosophy that inspired her to mentor me to become her successor as state president of the Illinois affiliate. But it was about more than the succession plan—it was the conversations about the Federation and the challenges that we encounter as blind people that we believe is making the transition fluid for ourselves and our members in the National Federation of the Blind of Illinois.

Denise startled me in 2019 when she told me that she wanted me to succeed her as state president. I knew that she had begun mentoring me for leadership within our affiliate when she asked me to join the executive board as second vice president in 2018, but I did not imagine that nine months later she would change my life by asking me to consider a run for the state presidency. Denise knew that she had sparked my interest and, from that moment forth, we began preparing for our 2019 state convention. This is the key, the transition has to be a joint partnership, working together to make the transition calm for the membership and the transitioning officers. It is a worldwind endeavor but, with great leadership steering the ship, the transition is seamless.

In the midst of a global health crisis, we stayed on course for the transition of power at our 2020 state convention. I watched Denise shift gears to plan for a virtual convention. The pandemic took away our last chance to work together to plan an in-person event, but it allowed me to stand in the midst of unwavering leadership as Denise planned for an event for which we did not have a blueprint. So, as I planned for my first state convention as state president, I felt uneasy because I was planning for a hybrid convention, without a blueprint. Denise and I had multiple conversations about inviting presenters, finding Zoom hosts, and creating a full agenda for our weekend event. Those logistics were not the only items on my mind, I wanted my first state convention as state president to be fun, educational, and empowering. How does this happen in a hybrid environment? Denise talked me through making my first state convention as president an event that highlighted the accomplishments of our organization but also an experience that demonstrated the shift of power from one leader to another. Denise and I do not lead the same, but our core values of leadership are the same. We challenge ourselves and our members to stretch themselves and go beyond their boundaries to live the lives that they want!

The transition from one president to another has its challenges and rewards. While Denise and I know that our love for the National Federation of the Blind grounds our leadership in the movement, our mutual respect for one another and our bond as sister-friends serves as a blueprint for the next generation of women leaders.

By Justin Young I have been a member of the National Federation of the Blind since 2009 when I was involved in the New York Association of Blind Students. I have always had a passion for legislative and advocacy work. I have held several leadership roles in the New York affiliate since 2017, and I was excited to be asked to join the national staff as a government affairs specialist in late January 2022. Some of our legislative priorities that I work on include the Medical Device Nonvisual Accessibility Act and the Transformation to Competitive Integrated Employment Act, which I gave a few updates on during the 2022 National Convention.
Read Justin Young's thoughts on the anniversary of the ADA and improving web and app accessibility.

By Gary Wunder
Learn about the Braille Monitor from the Editor