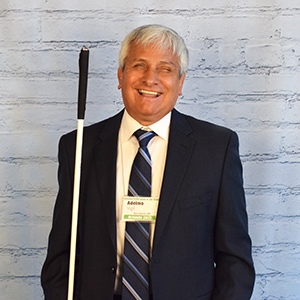 Adelmo Vigil was born in the small community of Amalia, New Mexico, in 1951. He was adopted as a baby by his aunt and uncle and raised as an only child on their small ranch. Although it was clear very early that he did not have normal vision, his parents expected him to handle his share of the chores, which included caring for the horses, cows, sheep, and goats. At the age of five Adelmo received the official diagnosis of retinitis pigmentosa. He began his education in the local public school, but no one there had any expertise in the needs of blind students. Adelmo was not taught Braille, could not read the print that he was expected to use, and therefore did not read or write well. In 1964 when he was thirteen, his parents decided to enroll him in the New Mexico School for the Blind. Although the family did not wish to be separated, it was their hope that Adelmo would receive a better education at the residential school.

I remain passionate about helping the blind live the lives they want, particularly young people, and will do my utmost to build the National Federation of the Blind and to advance our goals.

Adelmo's first two years at the school for the blind were no different from his public school education--he was still encouraged to use his limited vision. He remembers that each weekend he had to write an essay for his English class to be submitted and read aloud on Monday. Adelmo would write the piece and memorize it, because he could not read his own writing. But, after two years of struggling, he went to an eye examination and was told by the school nurse who had accompanied him to the appointment, "I have some bad news for you. You're going to have to learn Braille." The relieved Adelmo responded, "That is the best news I've ever heard. Maybe I'll learn to read now."

Passionate about mentoring and teaching young people, Adelmo pursued a degree in elementary education at Western New Mexico University. There he met his wife Soledad, who was also pursuing a teaching career; they were married in 1975. When he began to seek employment in the Silver City area, where he had been a successful student teacher, Adelmo encountered discrimination for the first time. None of the local schools could hire him, because his name was not on the list of teachers available for hiring provided by the district administration, even though he had completed his student teaching at one of the district schools. Fortunately, his student teaching supervisor, Travis Columbus, believed in Adelmo's capabilities and helped him file a complaint against the district with the New Mexico Human Rights Commission. Ultimately, in 1977 Adelmo applied for a position in Shiprock, New Mexico, and began his teaching career. The principal at Adelmo's first school in Shiprock would not assign him to some of the routine responsibilities expected of other teachers, such as supervising students during recess, but when Adelmo transferred to a different school, the principal there was eager to have him not only assume all the duties of other teachers, but to serve on the curriculum committee and in various other roles. Adelmo gained a reputation of being gifted with difficult students, and parents were asking for their children to be in his classes. He also coached junior high and high school wrestling.

Adelmo's experiences teaching sighted students and combatting discrimination earned him an invitation from Joe Cordova and Fred Schroeder to speak at the 1982 convention of the National Federation of the Blind of New Mexico in Albuquerque. That convention and his first national convention a year later were revelations to Adelmo. "I realized that I was not alone in facing challenges and discrimination and that I had the Federation family behind me. I also learned that the progress I had been able to make and that other blind people were making was due to the work that the National Federation of the blind had been doing since its inception," he says. Adelmo immediately became involved in the affiliate and has served in various roles since that time, culminating in his election as affiliate president in 2012.

Adelmo's passion for helping his blind brothers and sisters also led to his second career. In 1989 he was appointed to the Board of Regents of the New Mexico School for the Blind, a position from which he helped engineer the school's dropping of its NAC accreditation. In 1993 he moved to Alamogordo to take a position as director of the New Mexico Commission for the Blind's orientation and adjustment to blindness center. In 1997 he became deputy director of the Commission and continued to serve in various roles there for the next ten years. He was particularly passionate about working with young adults in the commission's summer programs. He retired in 2007 but jokes that he has retired three additional times since then. In 2009 he received training as an orientation and mobility instructor through Louisiana Tech and has received the National Orientation and Mobility Certification (NOMC) from the National Blindness Professional Certification Board. He went on to supervise and mentor other blind travel instructors.

Adelmo was elected to the NFB Board of Directors in 2016. He says, "I am honored and humbled to serve on the board and to give back the encouragement, support, and love that I have received from my Federation family. I remain passionate about helping the blind live the lives they want, particularly young people, and will do my utmost to build the National Federation of the Blind and to advance our goals."

Adelmo and Soledad live in Alamogordo. They have two sons, Adrian and Gabriel, and six grandchildren so far.