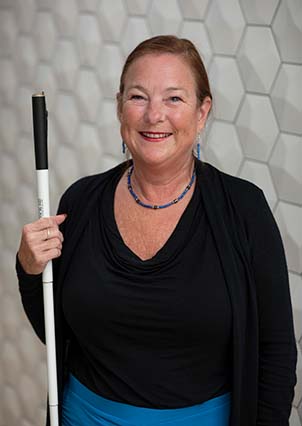 Carla was born and raised in Southern California in the early 60's, the youngest of 4 children. In the summer before fifth grade, Carla lost a great deal of vision but did not notice it until she started school in the fall and was unable to read the chalkboard from the front row. A few years earlier, her older brother had been diagnosed with a rare genetic eye condition called Stargardt's disease, which resulted in the loss of central vision. It was soon confirmed that Carla had the same condition. She was diagnosed legally blind in 1971.

The National Federation of the Blind taught me that blindness was only as limiting as I allowed it to be. My friends and colleagues in the movement have been more than ideal role models; they have saved me from a life of regret and underachievement.

Because of her remaining peripheral vision, Carla did not "look blind", so she was not taught Braille or any other alternative techniques of blindness. She had very little experience with blind people. The only blind person she knew was her brother, and he was forever using his blindness as an excuse for standing on the sidelines. Carla knew that this was not the life she wanted and was determined to do everything in her power to convince the world that she was not blind.

After high school Carla went to Humboldt State University in Northern California. There she met her husband Lucas. They were married in the summer of 1981 and moved to San Diego for Lucas's master's degree program. Though Carla had not completed her bachelor's degree, she was more than happy to put her college career on hold and work to support the couple. Her one year of college had not been very successful. Without the ability to read Braille and eyesight too poor to read print, Carla, who had been an A student in high school, saw her grades drop.

She got a job as a Montessori Preschool teacher in San Diego while Lucas completed his master's degree. Their daughter Alison was born in 1983. In 1985 the family moved to Illinois. Lucas enrolled in a doctoral program at the University of Illinois, and Carla decided to complete her bachelor's degree. With Lucas' encouragement, Carla asked for accessible textbooks and decided to learn Braille. The staff at the university’s disabled student's services office told her how difficult Braille would be to learn and how inefficient it would be. Discouraged and defeated, Carla wondered if there was any hope for her future. Fortunately she learned of a scholarship program through the National Federation of the Blind. She won a scholarship from the organization’s Illinois affiliate in 1988. The state convention changed her life. Her negative attitudes about blindness and about her own potential to be a successful professional were replaced by confidence and self-assurance that remain a hallmark of her character today.

After both graduating with High Distinction from the University of Illinois in 1988, the McQuillans completed their family with the birth of their son Duncan. They moved to Oregon to be near Carla's family. Carla started her own Montessori preschool, which later expanded to include 3 schools and a Montessori Teacher Certification Program. Carla served as President of the National Federation of the Blind of Oregon from 1992 until 2006, when her business responsibilities became too demanding. She also served on the NFB's national board of directors from 1998 until resigning from that position as well in 2006. She was re-elected president of the Oregon affiliate in 2012 and still serves in that capacity. She is the director of NFB Camp, the program that offers child care during the annual convention of the National Federation of the Blind. Carla was again elected to the national board of directors in 2016.

"I had such horrible misconceptions about blindness for most of my childhood and early adult life," Carla says. "I thought I knew what blindness meant, and I didn't want any part of it. The National Federation of the Blind taught me that blindness was only as limiting as I allowed it to be. My friends and colleagues in the movement have been more than ideal role models; they have saved me from a life of regret and underachievement."