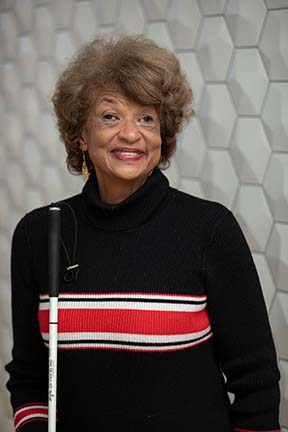 Ever Lee Hairston was unanimously elected to the Board of Directors at the 2010 National Federation of the Blind (NFB) convention on July 6, 2010, in Dallas, Texas. She brings considerable experience to this position, having served in various capacities with the NFB over the years—including nineteen consecutive years of service on the NFB Scholarship Committee and a fourteen-year stint as first vice president of the NFB of New Jersey. Ever Lee founded and served as the president of the Garden State Chapter of the NFB of New Jersey from 1991 until 2005, and for many years she was the coordinator of the LEAD Program, a mentoring program for blind and visually impaired teenagers. She currently serves on the board of directors of the Louisiana Center for the Blind.

Born to Arizona and Clarence Hairston on the Coolemee plantation in Mocksville, North Carolina, Ever Lee is the third of seven children. She grew up and attended schools in the segregated South. “I felt like a second-class citizen, using hand-me-down books in school; and, due to unexplained vision problems, I had to struggle to read from the bulletin board,” Ever Lee noted. In spite of the challenges of growing up in the segregated South and continuing visual problems, Ever Lee had a strong desire to become a nurse. Ever Lee’s parents simply could not afford to send her to college; so after high school, Ever Lee went to New York City to earn money for college by working as a live-in maid. She returned to North Carolina at the end of the summer anxious to pursue a nursing career. However, she failed the required eye examination and was told that she would not be suitable for admission to Duke University Nursing School. “I was heartbroken but refused to be defeated,” she said. She was accepted at North Carolina Central University, where she earned a teaching degree.

After graduating from North Carolina Central, Ever Lee taught high school business courses in New Jersey. While working as a high school teacher in New Jersey, Ever Lee’s eyesight continued to deteriorate. She finally sought answers and medical care. Ever Lee, along with three siblings, were diagnosed with a genetic eye disease, retinitis pigmentosa (RP). And, four years after starting a challenging teaching career, Ever Lee was forced to resign from her position because of her impending blindness.

At the age of twenty-nine, facing total blindness, with a failed marriage, a child to raise alone, and uncertainty about future employment, Ever Lee admitted to being devastated and feeling sorry for herself. However, she held on to the hope that a better way of life was in store for her. Ever Lee admits to believing in the old adage that “When God closes a door, He opens a window.” She began looking for the window.

After inventorying her strengths, she stepped through a window of opportunity at New Jersey’s Rutgers University, where she took graduate courses in counseling. In 1983 she landed a Counselor Trainee position with the Camden County Department of Health and Human Services. But, as Ever Lee explains it, “With no blindness skills, I was faking my way through.” She notes that she relied heavily on sighted people to read to her and to act as guides.

In 1987 Ever Lee received a call from Jackie Billie inviting her to a NFB convention in Phoenix, Arizona. At first she made excuses because she was afraid of requesting the time off from her job. Jackie was persistent, and Ever Lee finally agreed to attend the convention.

Ever Lee describes arriving at the hotel in Phoenix, Arizona, to the unfamiliar sound of canes tapping and the unsettling feeling of dogs licking her legs. The most profound experience, as Ever Lee explains it, came when she started through the registration line. She remembers being asked, "Would you like a Braille or print agenda?" She could no longer read print and did not know Braille. It was then, according to Ever Lee, that a light bulb went off.

"I am illiterate," she thought. She talked to as many people as she could at that convention in Phoenix, Arizona, and learned about the NFB centers. From then until 1990 she continued to function without blindness skills but worked on a plan with Joanne Wilson to get to Louisiana where she could be trained.

Ever Lee attended the Louisiana Center for the Blind from October 1990 until April 1991. She learned to read Braille, mastered cane travel and independent living skills, and learned to utilize adaptive technology. She returned to New Jersey, after the Freedom Bell rang for her at the Louisiana Center, with a confidence she never had before, integrating blindness skills into her everyday life.

Ever Lee credits her training at the Louisiana Center for the Blind with enabling her to succeed at her chosen career. After twenty-six years holding many successive positions with the Department of Health and Human Services, Division of Alcohol and Substance Abuse Program in New Jersey, Ever Lee retired from the position of program director in 2006.

In July of 2006 she moved to California. She continues to devote tireless hours mentoring and advocating for the blind, as well as delivering inspiring speeches to blind and visually impaired audiences and educating the sighted public about blindness. Ever Lee is blessed with one son, Victor; a wonderful daughter-in-law, Brenda; and three energetic grandchildren: Briana, Kendall, and Jasmine. She enjoys traveling, reading a good novel, and spending time with family and friends.