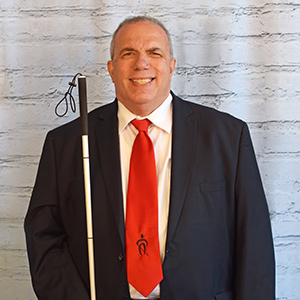 Born July 6, 1949, in Montclair and raised in Bloomfield, New Jersey, Joseph Ruffalo, Jr., had already graduated from Bloomfield High School, attended Montclair State College, and served America in Vietnam, where he earned a Bronze Star, before he learned in 1976 that retinitis pigmentosa would slowly claim his vision. For six years he continued his work as a manager in a Thom McAn shoe store, but by 1983 he began looking for guidance about how to achieve greater proficiency and control over his life as a blind adult.

One of the most important things for members of the blind community to do is to teach the public that blindness is only a characteristic. With the proper training, skills, attitude, and techniques, blindness can be reduced to a physical nuisance.

The staff at the Joseph Kohn Rehabilitation Center (JKRC), then located in Newark, told him he should not learn to use a cane, read Braille, or master any adaptive devices because he still had enough vision to do without them. Though eager to obtain the necessary skills, at the time Joe believed he had no recourse but to adhere to the advice of the only professionals he knew. Not until 1986 did he learn to use a cane, and he accomplished that by teaching himself. While at JKRC, Joe discovered a talent for baking, which led to a successful nine-year career as the owner of a pastry business.

In 1988 Joe tentatively attended his first NFB chapter meeting in Newark. He reports that after ten minutes he knew that his life was about to change dramatically. Realizing that the NFB was a place of fraternity and empowerment, empathy and accomplishment, Joe says, “I saw blind people doing things I wanted to do. They were holding jobs, volunteering, and achieving in every pursuit.” This was the beginning of Joe's own growth and achievement. In 1990 he became second vice president of the New Jersey affiliate; two years later he was first vice president; and by 1993 he was president of the NFB of New Jersey, a position he maintains to this day. “It is a tremendous honor and responsibility to promote positive attitudes about blindness and the abilities of blind people,” Joe comments.

But Joe's community involvement has not been limited to the National Federation of the Blind. He has been a leader in the Lions Club for over twenty-five years, serving as president for three. He has also held positions as zone/regent chair and serves on the District 16-E cabinet. In over twenty-four years with the Knights of Columbus, Joe has held the positions of guard, warden, and deputy grand knight, and was an active member of the Boy Scouts of America for over fourteen years. As past president of the Special Education Parent and Professional Organization for thirteen years and past chairman of the board of trustees of the New Jersey Commission for the Blind and Visually Impaired, he has further worked to assure the full integration of people with disabilities into society.

Joe attended the Therapeutic Massage Center to obtain certification in massage therapy and from 1998 to 2000 provided massage for staff, patients, and visitors at Clara Maass Medical Center in Belleville, before moving his practice to a private office. He has served as a consultant to the Somerset School of Massage, making recommendations to staff and students and answering questions about training methods for blind students.

Joe also worked to smooth others' transitions from dependence to independence as a leader in two programs sponsored by the New Jersey Commission for the Blind and Visually Impaired. He was previously employed by the First Occupational Center of New Jersey as a program specialist in the Senior Community Independent Living Services (SCILS) program, which identifies people over age fifty-five in Essex and Ocean counties who have experienced vision loss, with the goal of teaching independence skills so that these seniors can remain active in the community and independent in their homes. As state program director and northern region coordinator of the Leadership, Education, Advocacy, and Determination (LEAD) program, administered in partnership with Heightened Independence and Progress, Joe provided mentoring activities for blind teenagers and their families. Unfortunately, the LEAD program was terminated as of October 1, 2013.

Joe’s many contributions to the community were recognized in November 2000 when he was honored with the Partnership for Progress Award at the New Jersey Commission's Believe and Achieve ninetieth anniversary celebration. In July 2001 his leadership in the blindness community was again acknowledged when he was elected to the board of directors of the National Federation of the Blind. In October of 2002 the State of New Jersey honored Joe by presenting him with the New Jersey Vietnam Service Medal.

Joe has always been encouraged and supported by his wife of thirty-six years, Judy, and his two sons, Joseph and James. In his spare time Joe likes sports of all kinds, especially baseball and basketball, and enjoys hosting Thru Our Eyes, an Internet radio program that highlights blindness issues, discusses technology, and promotes positive attitudes about blindness.

Joe’s life and work express his commitment to the blind and their struggle for equality in society. His achievements stand as an example for others, like those of the Federationists who deeply impressed him at his first chapter meeting. He achieves and grows, facing every challenge with energy, enthusiasm, and common sense. In so doing, he exemplifies his belief that “one of the most important things for members of the blind community to do is to teach the public that blindness is only a characteristic. With the proper training, skills, attitude, and techniques, blindness can be reduced to a physical nuisance.”