Becoming a Federationist: My Scholarship Journey

Becoming a Federationist: My Scholarship Journey

Prior to my experience as a scholarship finalist, I was only familiar with the National Federation of the Blind through communications with several friends of mine. They were involved in a variety of positions, from members of the organization to the president of one or more student divisions. Despite my familiarity with these members of the NFB, I had a host of preconceived notions, and the last thing I wanted to do was get involved. I was put off by the politics, and prior discussions suggested that my ideas would only be met with condescension. Nonetheless, I stood to gain a lot from applying to become a scholarship finalist, so I decided to bite the bullet. To my astonishment, I made the cut, and I decided there and then to approach this as an opportunity. I flew to Orlando, Florida in July of 2018 with an open mind, and because of the friends and mentors I was able to network with during the convention, my outlook has completely changed. 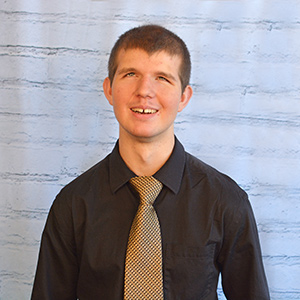 I met up with my first mentor that evening, and was hit with my first shock of the convention. He and I were walking back to the wing of the hotel where our sleeping rooms were. We were about to part ways when out of the blue he said that he had gotten turned around, and asked me for directions to an elevator. Up to this point, I was under the impression that the NFB discouraged asking for directions. Rather, one was just supposed to independently figure out their way. I was adamantly opposed to this, only to find that a leader of the organization, and a veteran of more than a decade of national conventions, asked a mere scholarship finalist for directions as if it were the most ordinary thing in the world. This experience, coupled with the excellent conversation we had about parenting as blind individuals and his experience with the NFB, truly surprised me, and I was eager to learn more as the convention progressed.

I had the honor of meeting with five other mentors after that day, and each one demolished my expectations. They were witty, informative, and actually cared about my well-being. One mentor advised me to get lunch instead of meeting with her a second time, and that taking care of myself should be my priority. I had meals with intellectuals, debated Federation policy with seasoned members of the organization, and was humbly asked to be a temporary gofer ferrying bottles of water to and from the Presidential Suite, all in the same day. The conversation and lack of judgment blew my mind, and I found that I enjoyed every moment.

However, I was still convinced that because I was not affiliated with the NFB prior to the convention of 2018, I would only receive the minimum scholarship awarded. I wasn’t necessarily opposed to this, I just took it to be a fact. Because of this, I presented myself and my ideas about independence, my occupation, and the Federation in the best light I could, knowing that I was only there to network as opposed to maximizing the amount of my scholarship. I introduced myself to the scholarship committee and the board of directors the same way: “My friends, I am here for the check. Not the one I hope to cash at the bank, but the reality check about the National Federation of the Blind.” My honesty made me memorable, and, according to my mentors, my perspective made me interesting. I stood out because my only goals were to gain knowledge, promote my field, and be myself, and in the end, as a newcomer to the Federation, I was awarded more than I anticipated.

The NFB has surprised me at every turn, and through the national convention my perceptions were turned completely around. I am now proud to say that I am affiliated with the NFB. I am part of a team that provides the Federation with a platform to stream state and national conventions online, which aligns with my occupation. I am collaborating with several friends to revamp the student division in my home state, as well as working closely with three state affiliates to fund raise and provide additional aid where possible. The NFB respects my obligations outside of the organization, and as long as boundaries are specified, working with the organization only consumes the amount of time and energy you allow it to. Within the NFB and outside of it, the same words are true: speak up, so that you can live the life you want.