Since the day I became blind, I always had a fear of being a blind parent.

When dating as a single man, I would be asked questions about having children from girlfriends or potential suiters. I would always give an answer of joy and excitement, but a feeling of sadness within because of my feelings of being incapable of being a blind parent. After marrying my wife in 2005, the fears of being a parent persisted and my confidence continued to maneuver on a downward spiral.

However, my feelings dissipated when I met some blind parents from the National Federation of the Blind. 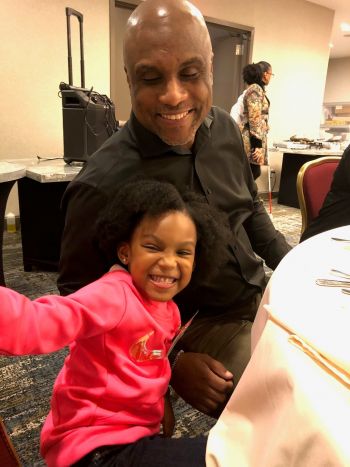 Being surrounded by blind parents and observing their parental skills gave me the confidence and motivation to become a parent. In 2014, my wife and I were truly blessed with the arrival of our daughter Camille. Since her birth, Camille and I have been inseparable and she has confidence in me to provide her the parental guidance that she deserves. I have enjoyed the countless opportunities of waking her up and getting her ready for school. As I prepare to take her to school, I enjoy leaving our home holding hands and entering our mode of transportation. When we arrive, I assist her in exiting the car and we hold hands until we reach the entrance of the school. We give each other a big hug and I depart to my place of employment.

The process mentioned above shows a man who is confident and self-assured in being a blind parent. However, a new fear has developed within me which is caused by the negative attitudes and misconceptions from society about the capabilities of blind parents raising children.

Parenting While Blind is a fear of someone who believes that blind people are incapable of being parents. They will witness a blind person’s interaction with their child, and any misstep by the blind parent will trigger a phone call to child protective services. This phone call will lead to an investigation and possible removal of the child based on blindness and not the parent’s capability to care for their child.

There have been a few examples in hospital settings of mistreatment of blind parents based on misconceptions and negative assumptions of their ability to care for a child. In 2010, a blind couple in Missouri gave birth to a beautiful baby. After receiving tips on how to properly care for a newborn, the couple was asked if there would be someone with them twenty-four hours a day to help them care for their child. The couple informed hospital staff that they would not have someone with them twenty-four hours a day. Alarmed by the couples’ refusal to acquire assistance in caring for their newborn, social workers from child protective services of Missouri were contacted and the newborn was removed from their care. With help from advocates such as the National Federation of the Blind of Missouri, the newborn was returned to the parents after sixty-eight days.

Similarly, in 2018, a blind couple in Oregon was ordered to obtain twenty-four hour assistance to care for their newborn. These two examples display the low confidence and the lack of awareness of healthcare professionals in the abilities of blind people caring for children.

Recently, two hosts of a morning program called The Breakfast Club were dismissive of the abilities of blind people being able to properly care for children. During the show, hosts DJ Invy and Charlamagne the God solicited phone calls from listeners asking the question, “Would you allow a blind person to care for your child?” Each listener that called into the show emphatically stated no in allowing a blind person to babysit their children.

In addition to saying no, the listeners displayed the ignorance and the misconceptions that continue to plague the blind community which lead to hidden barriers and obstacles that we as blind people must overcome. Even though there is not one solution that will dissolve this ignorance and these misconceptions, I believe that post-secondary educational programs such as social work and counseling can help eliminate the attitudinal barriers that create low expectations of the blind community.

The next day after watching The Breakfast Club, I asked my daughter “Do you think your daddy takes care of you?” My daughter replied, “Yes daddy, you take me to school, you feed me, and play with me.” After answering my question, my daughter asked me, “Daddy, why do you look so sad?” My response to her was, “I wish most people within our society felt the way that you do.”