I have been a member of the National Federation of the Blind since 2009 when I was involved in the New York Association of Blind Students. I have always had a passion for legislative and advocacy work. I have held several leadership roles in the New York affiliate since 2017, and I was excited to be asked to join the national staff as a government affairs specialist in late January 2022. Some of our legislative priorities that I work on include the Medical Device Nonvisual Accessibility Act and the Transformation to Competitive Integrated Employment Act, which I gave a few updates on during the 2022 National Convention. 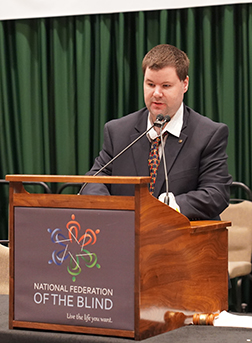 As I reflect on the thirty-second anniversary of the Americans with Disabilities Act as a blind person, I think of the work we still need to do to accomplish the overall goal of this law. One can argue the ADA was established to create equal access for those with disabilities. As we progress further into the twenty-first century, one area still needing improvements leading to equal access would be websites and mobile applications. Some tasks we might use websites or apps for are conducting research for work or school, completing online applications or forms, shopping, and electronic banking.

While applying for my current apartment, I had to complete a rental application via an online website that was not easy to navigate. Many of the buttons were not clearly identified with labels, there were images that didn’t tell me what they were, and when it came time to complete the actual lease, it wanted me to go through it and either electronically sign or initial on the color-coded sections. Because of this, I had to wait for sighted assistance instead of being able to independently use it myself.

While pursuing my doctoral program and conducting research, I came across several websites that had inaccessible PDF documents. These were simply scanned images of the article making it difficult for a screen reader to identify the text. There are, of course, work arounds like being able to use the Optical Character Recognition (OCR) feature of the software on my computer, but if the website managers made the document in an accessible format ahead of time, it would ensure that blind people could access the materials in the same manner as others.

While attempting to apply for jobs at a New York State-based college, I found the website to be very accessible. I was able to independently edit any incorrect information that automatically generated from my attached resume, upload extra documents, and answer the additional questions. Even though I didn’t get the job in the end, I was impressed by the level of accessibility from this organization, which illustrates the point that if the site is built with accessibility included, we as blind people can interact with it completely independently.

The above examples are only two issues that I have experienced, but if one were to ask other blind people, I am sure they would agree with me that it is time that Congress enact legislation like the Twenty-First Century Website and Mobile Accessibility Act ensuring the blind along with other disabled Americans may access the same information as, to engage in the same interactions as, and to enjoy the same services offered to other persons with the same privacy, same independence, and same ease of use. By doing this, Congress will help ensure the true goal of the ADA is being achieved related to equal access!