Thinking Fast for a Show: How I Conquered My Anxiety to Perform on Stage

Thinking Fast for a Show: How I Conquered My Anxiety to Perform on Stage 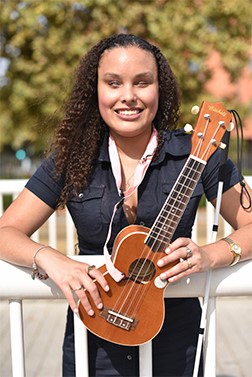 December 6, 2018 was the first time I played a gig that I organized myself. I'd spent weeks facilitating rehearsals with my incredible musician friends, continuously following up with the elusive owner of the venue I was trying to book, and promoting the show that was to take place on that wintry Thursday night the week before finals. A little over a year prior, I'd put together a band on short notice and played my first gig in Valencia, Spain. It was on that stage abroad that I realized that I could be a blind frontwoman and band leader.

I've always been sensitive and struggled with anxiety, even before I was diagnosed and knew what to call it. Anxiety comes with the territory of performing, but it's a whole different animal when you live with it off stage as well. I woke up on December 6 with my heart pounding and my mind racing. What was I going to wear? Would people even show up? Did I get all of the equipment we needed in order? What if something goes wrong? Would the person at the venue take me seriously as a blind woman? I tried to breathe as I carried out my busy day running from class to class around the bustling Berklee campus with my fiancé/percussionist who was keeping me grounded. I knew deep down that everything would work out, but I couldn't help but wonder if I chose the right shoes, if I was wearing the right outfit. I'd chosen a dress with decorative chain strands hanging from the bottom over stockings. The chains got caught in the stockings and they ripped, so I found myself running to TJ Maxx to buy more, which also ripped in the process of me trying to put them on. I had to go back to the store to find a pair of leggings, because I'd left mine at home. I had to video call my mom to verify that my comfortable flats would be acceptable to wear. This was all quite stressful, but it ended up okay.

An hour before the show, as the band and I got ready to catch our ride to the venue, the biggest hiccup occurred. I was practicing the acoustic set with my fiancé Shane when his bongos fell from his lap. One of the heads had completely broken and was no longer playable. I fought through my panic as we tried to ask around, the band members calling their friends, and my door person Cristy and keyboardist Ellis staying back with Shane to see if they could borrow a set of bongos from the ensemble department at school. My guitarist Sam, bassist Sophie, drummer Josh, and I made it to the venue right around when the show was supposed to start while those who had stayed back made their way to join us. Shane called letting me know that he could try and play with one bongo, and I said that's what I needed him to do, because we were all going to be on that stage together. We had a late start, and my anxiety nearly sent me into a tailspin but everyone had a blast and I’ve learned a few valuable lessons since then. My family and a few friends were there, and I've got the videos to prove it.

Being a performer is no cakewalk, never mind being a blind woman who is leading a band while dealing with venue owners who may or may not be easy to work with. There have been times when I didn't have print music charts for new band members; I had to learn the hard way to be prepared for everything. I've had to learn to ask for help because I couldn't use the sound systems that weren’t like the ones I was used to, or because I didn't know how best to give a visual cue to my musicians when rehearsing for a gig or performance for school.

I did my senior recital online during the pandemic. It was supposed to be in front of a live audience with my band on stage with me, but instead, it was me set up in my kitchen at home with my sister behind the camera and my family in the other room watching the Facebook live stream as I sang over backing tracks and put on a show by myself. Virtual performances have their own stressors for me as a blind performer. For example, not knowing how much of the background a phone camera will capture no matter how many tips and tricks you have up your sleeve when setting it up, or having to send videos off to trusted friends and family before posting them to make sure they looked good. I've had to ask if I can be seen through my webcam performing live on Zoom, or have my pre-recorded videos screened after doing my best with my little tripod, voiceover guidance, and my phone. I've figured out that my computer's webcam is perfectly centered when I move the screen back and I don't have to worry about the background, so I've taken to recording my videos via Zoom and optimizing my audio settings to avoid having to get them checked or capturing my messy bed in the background. It's not easy being a blind performer, whether you're pre-recording in front of a camera or booking gigs for a live audience but you learn what works and how to navigate all of it, and for me, it is so rewarding to put myself out there. I follow my big dreams and I show the world blind people are capable in the process of living the lives we want. If you take away anything from this, it's that you're not alone in any struggle you face. Asking for help isn't weakness, it's strength, and the experience isn't as rewarding without people to share it with. There's a network of blind performers who have been where you are, and you are always welcome to the NFB performing arts division. If I can do it, you can do it too. Believe in yourself, because I already believe in you.